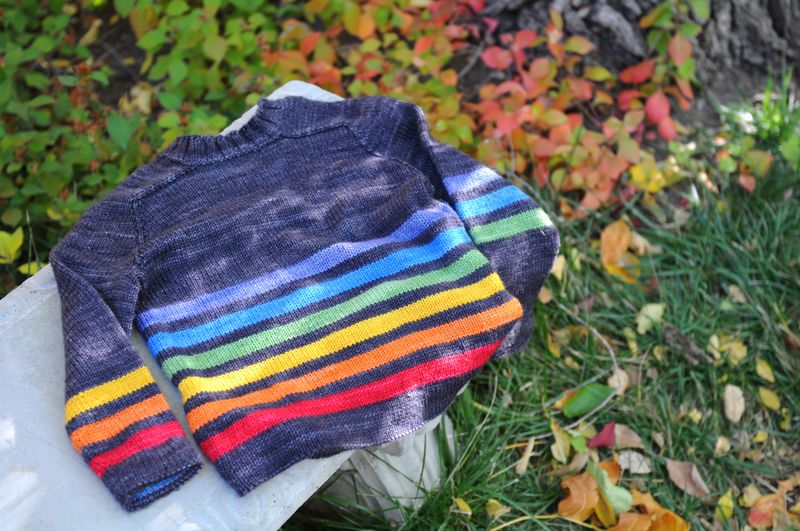 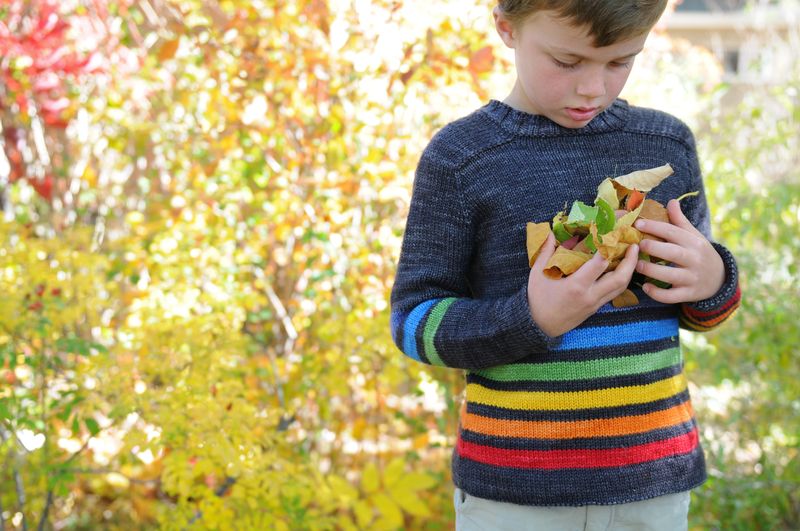 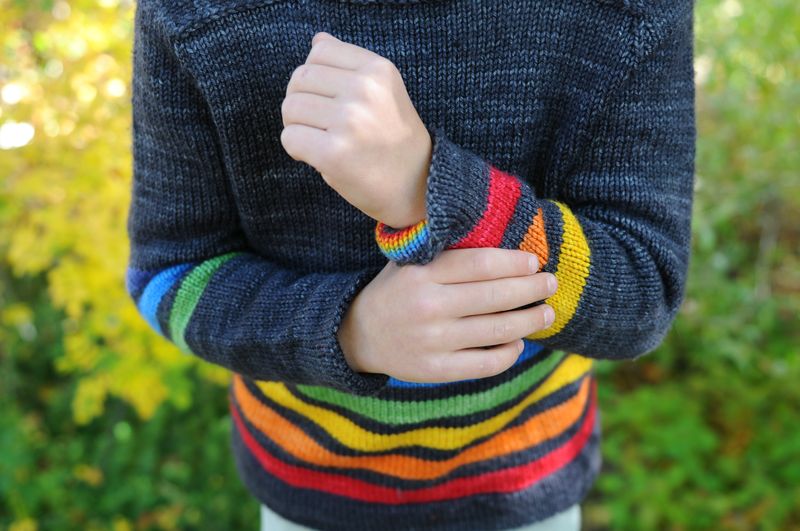 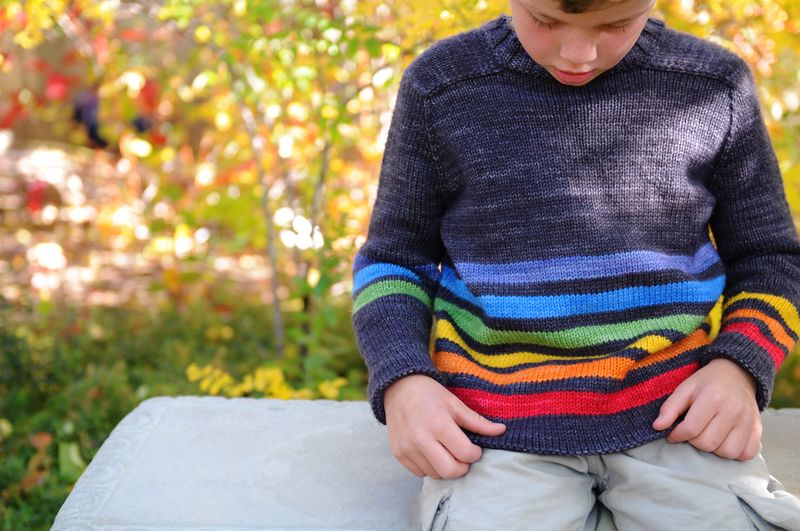 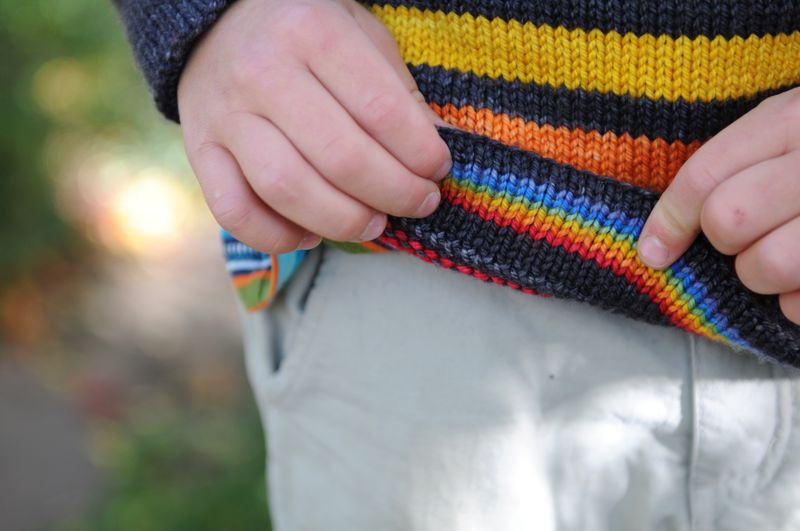 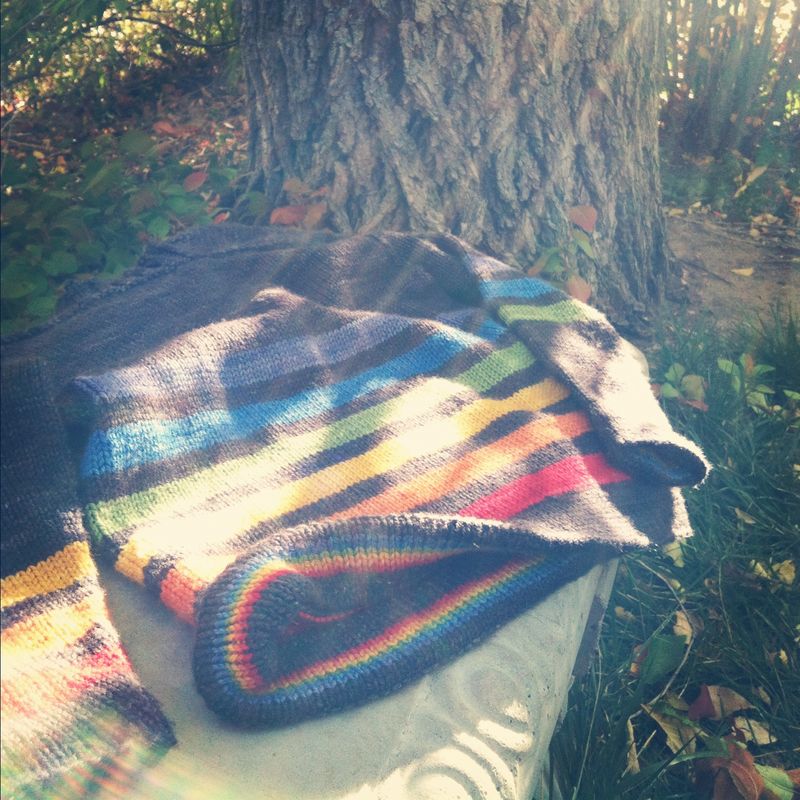 Even though my guy asked me, for a year, for a rainbow sweater I can't say he was over the moon about this one.  He smiled slightly when opening it on his birthday...though not as broad a smile as when he opened his elephant or the puzzle.

That's okay I suppose.  It is the risk we take as knitters.  Never quite knowing if the recipient will love or not love the item.  Whether it will fit or whether you have to re-do the neck three times like I did.

It's a gamble.  One I'm usually willing to take.  Although with this recent sweater, the "Rainbow Sweater", I may have started to think differently.  First of all I finished on time.  No late night, before the birthday knitting like some other years.  In fact, this sweater had time to block as well as dry!

The moment that changed me came after he opened it.  Yes, I was disappointed not to have received the full chandelier smile for a job well done on the long awaited rainbow sweater.  Of course, I would have loved that.  It really wasn't when the big daddy had to convince him to look at the sweater for longer than two seconds.  The moment happened when we went to have him try it on.  You knitters out there, I know, can see this coming a mile away.  We put it over his head and wait!...It didn't even come close to making it over his head.  NOT.EVEN.CLOSE.

Deep breathing at that point wasn't really helping.  After weeks of gleefully planning and scheming and knitting this was NOT what I had expected to have happen.  I believe I took the sweater gently from his aching head, as I will admit that I did tug a bit thinking that somehow this couldn't, shouldn't be happening, and set it on the table behind me.  A small time out for the sweater.

A week later after feeling sick to my stomach about what to do I just buckled down and did it.  I ripped it out. The whole neck. Then commenced on a different type of neck and voila...it fit!  Well almost.  It's not as roomy as I would like.  I've decided though that seeing it on him finally made me ignore that little fact.

So, that's it.  The rainbow sweater.  The good and bad of it.  Though at this point I can almost forgive the sweater when I see my little guy swinging in the front yard, rainbow flying in the air.

I've decided that there will be no more secret knitting...at least that is what I say now.  Time will tell.  I'm serious though.  I'm pretty sure....

Posted at 11:01 PM in For the Boys, Knitting, Play, Waldorf Education | Permalink

Kellen! I just love the secret rainbows in the hem and cuff facings. So sweet!

Gosh, that is just the most beautiful sweater! I love the attention to detail and the colors!

Thank you Brandy! It was a joy to knit. Plus, my guy loves it now so that makes it all worth it. 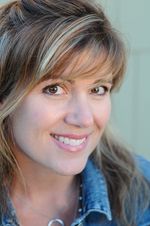